Part of the project: “Creation of a comprehensive monitoring system of the natural environment of the Moravian-Silesian Region”, public procurement no. 126/2009 - Part 3: Surveys of invasive species

The aim of the project was to investigate the occurrence of the American mink in the Poodří Protected Landscape Area and its surrounding areas. The survey was conducted using floating monitoring rafts, a non-invasive method, where rafts with mud in the middle are placed on the water to make capture the tracks of animals which pass across them. Depending on the shape and size of the tracks, it is possible to differentiate animal species. The rafts were laid on both the Oder River and on adjacent ponds and tributaries of the river.

The American mink is an invasive species which can negatively affect our native species. Particularly endangered species in the Poodří are waterfowl and amphibians. American mink is now found across most of the Czech Republic. In the Odry catchment in this area, however, there have been minimal records. Therefore, a systematic survey was carried out at one of the most valuable water and wetland sites in the area, in order to confirm or refute the presence of mink in the area and, where appropriate, to assess the state of the population and its use of the environment. On the basis of the survey, it will be possible to implement a possible management plan and to set up further monitoring of this kind. 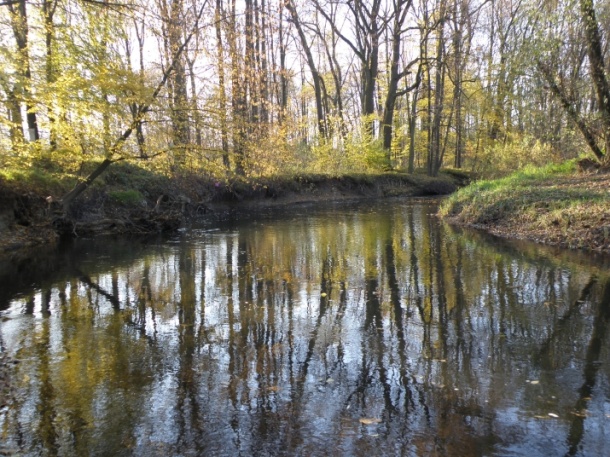 About the Poodří Protected Landscape Area

The Poodří Protected Landscape Area is located in the Moravian-Silesian Region, between Nový Jičín and Ostrava. The area, especially the north and east of the protected area, is relatively densely populated and the streams (tributaries of the Odra River) are regulated, leading directly to the development of municipalities. At the core of the Poodří PLA is the Odra River and its floodplain. This alluvial plain, with a varied micro-relief, originated in the Quaternary period and subsequently was the focus of economic exploitation after the medieval colonisation of the 13th and 14th centuries.

This unique area has a well-preserved waterways where flooding occurs regularly in large parts of the floodplain. The Odra stream meanders through this area and is linked to many pool systems. In the floodplain, there are alluvial meadows and floodplain forests including oak and ash which represent almost 50% of species, but also species such as oak-hornbeam. This area has the status of a ‘Protected Landscape Area’ and has also been included in the wetland areas of the Ramsar Convention. The area is also home of many endangered species, mainly aquatic and wetland flora and fauna including many amphibian species, over 300 species of birds, Eurasian otter and more.