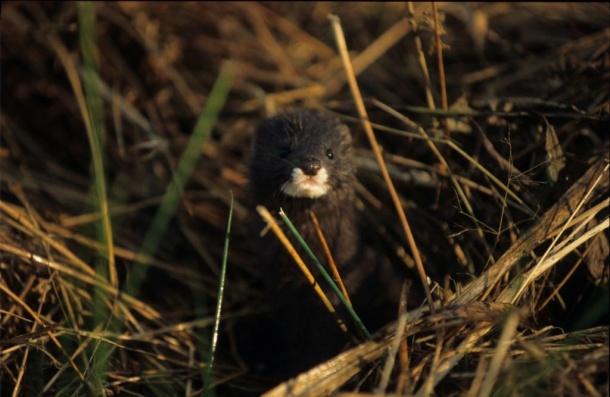 European mink (Mustela lutreola), together with the Iberian lynx (Lynx pardina) and the Mediterranean monk seal (Monachus monachus), are among the three most endangered animals in Europe.

The European mink, a member of the mustelid family, have slender, elongated bodies. The colour and structure of the European mink makes it have a striking resemblance to the American mink. However, this similarity is the result of a convergent development, and the European mink is the closest relative is actually the European polecat. The body length, with tail, is between 40-60cm and the weight can vary from 0.5kg for females and juvenile males, to greater than 1kg for large males. Their coat colour is glossy brown to almost black. The striking feature, which at first glance distinguishes it from the American mink, is the presence of a white-coloured upper lip. The white colour then forms the mask around the whole mouth.

European mink is bound to aquatic environments, where it mainly lives in small to medium rivers, with deltas of large rivers being an important environment. European mink are solitary animals, only during joining up in the breeding season (end of February and March). The European mink doesn’t delay pregnancy like other species and the females give birth to 4-5 pups after 35-42 days. The female will then rear the pups on her own.

European mink, unlike the American mink, is generally considered a food specialist, with amphibians playing a dominant role in their diet. Our data from the Danube Delta, however, do not confirm these claims and shows that the diet of the European mink differed in autumn and in differing environments.

Distribution of the European mink probably included the whole of Western, Central and Eastern Europe, although historical records are not complete and in addition to Europe, it also included in the Asian part of Russia. At present, European mink is only found in the northern part of Spain, the southwestern part of France and in the deltas of large rivers entering the Black Sea (Danube, Dnieper and Dniester). The situation in the former Soviet Union is uncertain. In addition to these populations, there is a repatriated population in Europe on Hiiumaa Island in Estonia.

The reasons for the decline of the mink in historical times can only be speculated yet the destruction of the natural environment has probably played the biggest role. At present, the biggest factor threatening the survival of this species in the wild is direct competition from the American mink. In areas where American mink has not yet arrived, such as the Danube Delta, European mink is threatened primarily by the destruction of the environment and persecution for their skin. European mink is named in Annexes II and IV of the EEC Council Directive on the conservation of natural habitats and of wild fauna and flora (FFH 92/43 / EEC) and is therefore a priority species.

You can read more about these in our publications here.