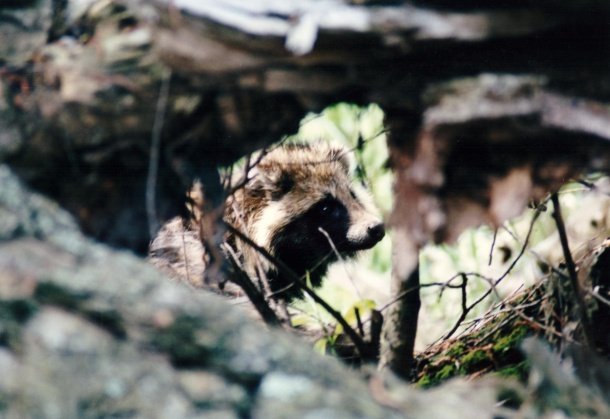 The raccoon dog (Nyctereutes procyonoides) is another additional species to our environment. This species originally comes from the Far East, indigenous to East Asia. It was introduced in Siberia and it has now spread westward from the European part of the former Soviet Union. In addition to this, there have also been escapees from fur farms. As a non-native species with considerable reproductive capacity, it is expanding in both the Czech Republic and throughout Europe. They are omnivores inhabiting a wide range of different habitats, sometimes linked to wetland sites.

The raccoon dog is part of the Canidae family, reaching up to the size of a fox, of which it is a close relative. They have a stocky body, short legs, and small rounded ears, noticeably protruding from the coat. Their coat colouring is similar to that of a badger or raccoon, with which they are often confused but not related. Its long, untidy coat, with a base grey-brown colour has a thick undercoat in winter. Its fur is also black tipped and has a particularly yellowish-brown hue. The legs are almost black, the tail is dark and without striations. The head is typically similar to the rest of the body with black eyes and pale nose with whiskers on the cheeks. In summer, the colour is generally lighter, sometimes with a hint of rufous. On average, raccoon dogs weigh from 4 to 11kg, fluctuating with the seasons.

The Raccoon dog track has four toes, an oval belly and claws. The track is quite wide and has large interspaces. It is commonly confused with dog or fox tracks as it is rather similar. The size of the back track is 4-5 x 5-6cm. The appearance of the front track is much more rounded than the oval hind paw. When looking at multiple tracks, they are often placed side by side in pairs.

Dog droppings have a species-specific odour. However, the shape varies greatly depending on the composition of the food. It may resemble droppings of other carnivores like fox, badger, wolf. They tend to form “latrines” with piles of droppings.

The Raccoon dog is well adapted to all environments. It inhabits forests, fields, pastures and wetlands. It also avoids living in proximity of human settlements and man-made areas such as vineyards, orchards and suburban forests. It is a monogamous species and lives in pairs or in family packs. Whilst it is a nocturnal animal, it can be seen as dusk as well. During the day, they dwell in their burrows as well as abandoned fox and badger burrows or hay bales. In waterlogged places, they can build shelters from grass and reeds.

When the temperature drops, they may fall into a false sleep, yet this is not a hibernation.

Mating occurs in late winter and the females are pregnant for two months. Once a year, in April-May, the female will give birth to 5-8 pups. After 4-5months, the pups become independent and after another 4-5 months, they become sexually mature. You can distinguish the young independent animals as they are usually darker in colour. The size of home range depends on the amount and availability of food.

It is omnivorous and has a varied diet including small rodents, amphibians, snakes, fish and birds (especially eggs and chicks). Their diet is diversified by insects, carrion, fruit, roots and plants such as corn. Whilst normally seen together, pairings of Raccoon dog will keep their distance when hunting.

Introduction outside of East Asia

As with other similar mammals, the raccoon dog was introduced to other parts of the world for its high-quality fur. Though, in the first half of the twentieth century, it was intentionally introduced to the western part of the former Soviet Union, including today’s Belarus, Ukraine and the Baltic States, from where it began to spread to the west. Approximately 10,000 individuals were released there from 1930 to 1950. In addition to the former Soviet Union, however, it was locally introduced in a number of countries such as Bulgaria, the Czech Republic, Finland, Germany, Hungary, Moldova, Poland, Romania, Slovakia and Sweden. Escapees from fur farms around Europe undoubtedly helped the spread of the animal. At present, the raccoon dog can be considered a widespread species in Europe.

The first reports of raccoon dog date back to the middle of the twentieth century. The main wave of migration was probably across the border areas with Poland in the North/North East, but individual data from South Moravia also suggest another possible migration direction from the South/South East boarder with Slovakia, where it has been known since 1943. This distribution was undoubtedly supported with the escapees from fur farms. Over the following 20-30 years, this species has progressively inhabited almost all of our habitable land. In 1960-1980, it occurred in only 5-10% of the Czech Republic but in the 1990s there was a sudden increase in occupancy to 39%. This increase continues, with the occupancy reaching 90.1% of the territory by 2012. It is possible, however, that they have escaped attention in the remaining quadrates (Anděra & Gaisler, 2012). Its occurrence can thus be assessed as nationwide.

As an introduced, invasive species, the Raccoon dog poses a potential danger to the native fauna of the Czech Republic. However, unlike species like the American mink, a direct negative effect has not yet been observed or adequately investigated. The raccoon dog has no protective status under the Nature Conservation Act. According to hunting legislation, it is one of the species introduced and undesirable, which can be killed under certain conditions - this activity is the responsibility of hunting guards and hunting management.

You can read more about the raccoon dog in our publications here.

We are actively monitoring the raccoon dog presence, find out more information on our projects here.