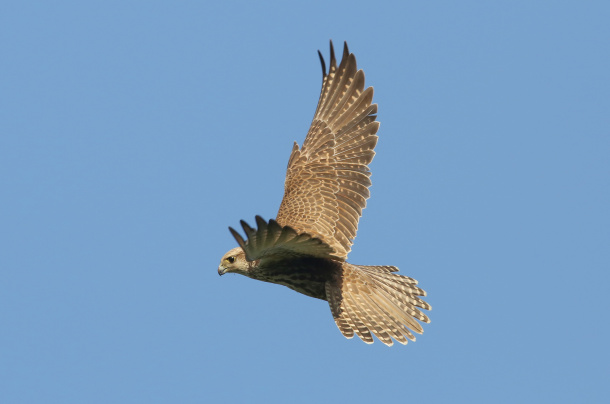 The Saker falcon is a brown-coloured bird of prey, with yellow legs and beak in adulthood. The wingspan is up to 130 cm. It is a universal hunter capable of hunting both in the air and on the ground.

The Saker is a master of the skies. In Europe, it preys on birds, mostly pigeons, but in the Asian part of its territory, it’s more likely to be preying on small mammals such as squirrels. They hunt at high speeds, attacking head-on and usually carry their prey to a quiet place, where it will pluck and tear at its preys’ skin to eat it. It used old, bird of prey nests for its own but can also be seen nesting on rocks. In recent years, it has also been seen nesting on high-voltage poles in ravens nests or on artificial mats. In neighbouring Slovakia and Hungary, most of the population has moved to artificial nesting sites in next boxes on these high-voltage poles. The advantage of these is they are easy control, it allows low human interference but provides the falcon with a smaller probability of the nest falling. In the Czech Republic, however, most couples are still in natural nests.

The Saker Falcon is distributed from the Czech Republic, which forms its north-western border, through Austria, Slovakia, Hungary, Romania to the Far East. It is a steppe species that lives in the steppic habitats of Asia. In Europe, it has adapted to the so-called cultural steppes such as large agrocenosis, and a similar environment.

In the past, it was an abundant predator when the European population was a fraction of the world’s population. Unfortunately, in the last 30 years the Asian population has almost collapsed. Today, the Saker is included in the IUCN Red List of Endangered Species. The collapse of the population in Asia was mainly due to the persistent unsustainable captured of wild Saker for falconry. This is still apparent in the major areas of distribution, especially the Arabian Peninsula, where there is still a huge demand for wild individuals, even though there are established breeding programmes in captivity. In some countries, Saker capture is still officially allowed and in some countries up to half of the adult population per year are caught. In others, the movement of individuals through the black market is high. Subsequently, this has put increased pressure to support the European population due to the negative status in Asia.

In the Czech Republic, Sakers are only found nesting in Moravia, and even here, there are only a few individuals. The major threats to them are disturbance during nesting, instability of nesting sites leading to the nest falling and poaching of nest for either breeding or selling of young individuals.