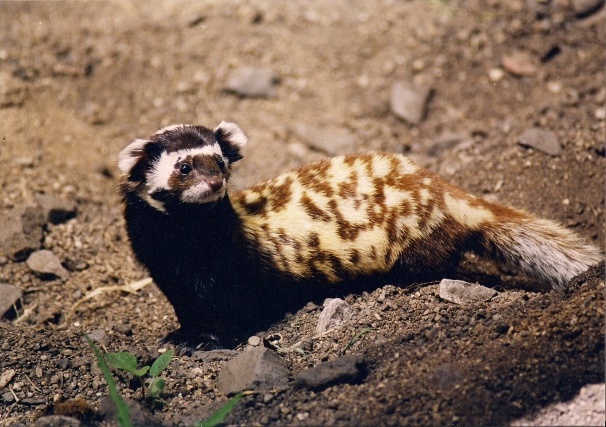 The Marbled polecat (Vormela peregusna) is a smaller mustelid inhabiting dry desert, semi-desert and steppe habitats. The Latin name is derived from the German word Würmlein meaning “little worm” and the Ukrainian perehuznya which means “polecat”. It is not a native species of the Czech Republic, but it is closest to us in the countries of former Yugoslavia.

The Marbled Polecat is one of the smaller mustelids. It has a strikingly colourful back, speckled with irregular yellow, rufous and brown spots. The tail is long and fluffy with long, dark brown fur and a yellow stripe in the middle. The bottom of the body and legs are dark brown. They have a dark mask around the eyes, a white muzzle and strikingly, a distinct white band above the eyes and on their ears. They range from 29-35cm in length and 300-700g in weight.

Mating season takes place in spring time, from April to June. Gestation is long, around 243-327 days as, similar to the American mink, the Marbled polecat usually delays implantation of the fertilised egg until more favourable conditions. So even though the pregnancy time itself only lasts 23 to 45 days, the pups are can be born 8 to 11 months after mating. Females usually give birth to 1-8 pups and rear them themselves.

The Marbled polecat is most active during dawn and dusk, when it uses its well-developed sense of smell to seek out prey. The most common prey are hamsters and ground squirrels along with other rodents, small birds, frogs, reptiles and insects.

Marbled polecats inhabit mainly dry desert, semi-desert and steppe habitats alongside agriculturally used environments such as pastures. The original species distribution extended from south-eastern Europe to Russia and western China. There is a subspecies in Europe however, Vormela peregusna peregusna, which is likely to span the areas of Serbia, Montenegro, Macedonia, Bulgaria, southern Romania, north-eastern Greece, possibly Albania and western Turkey. At least five other subspecies have been described in other areas of the enlargement area, but their taxonomic status is uncertain.

The Marbled polecat is included in the IUCN Red List of Threatened Species in the VU category. Above all, the most significant threat factors are the destruction of the natural environment, the use of pesticides in agriculture, the reduction of natural nutritional foundations and persecution due to possible attacks on poultry.