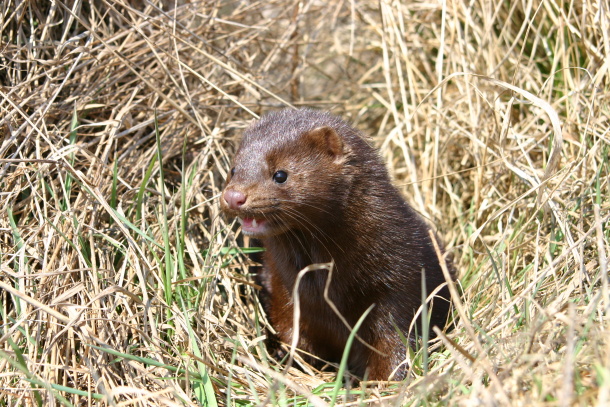 The American mink (Neovison vison) is a semi-aquatic mustelid. It is a non-native and invasive species in the Czech Republic.

It has a medium sized mink, ranging from 35 to 55cm, with a flattened head and pointed nose, a short chin and long tail. They can weigh from 0.5 to 2 kg. Males are usually larger and heavier than females in adulthood, generally 10% longer and up to 100% heavier (Wilson & Mittermeier 2009).

Generally, American mink fur is a reddish brown to dark brown colour, with only white markings on the lower lip and chin. Light spots may appear on the throat, chest, abdomen and groin areas which can allow for individual recognition. You may, however, come across mink with different colours which is a direct result of inbreeding on mink farms. Common alternate colours to see are silvery blue, light grey, or beige hue and there are an estimated 60 different colour variations. Up to 15 subspecies (Wilson & Mittermeier 2009) are distinguished in North America, where the species originates from.

American mink presence can be confirmed by identifying their tracks. 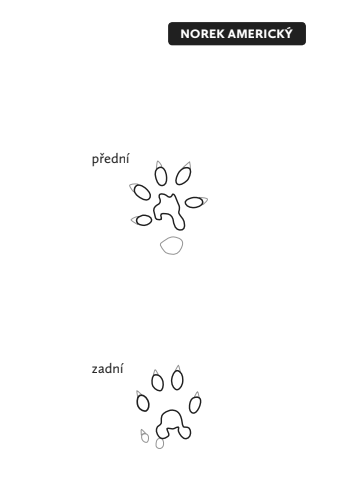 Their feet are webbed, yet this webbing doesn’t extend all the way to the end of the toes so might not be visible in their tracks.

As with all mustelids, the American mink is five-toed, although the first toe doesn’t always make a track.

From 2-3cm, the toes are quite distant from each other, with short but thick claws.

A distinctive feature of the mink track is the front footprint where the finger pads point to the sides to form a little star.

Their droppings are similar to otter but are narrower in diameter, from 0.5-1cm, smelling of mink. Occasionally, mink will create latrines where many droppings can be found but unlike the otter, it is not known for its marking behaviour therefore droppings are usually very difficult to find. 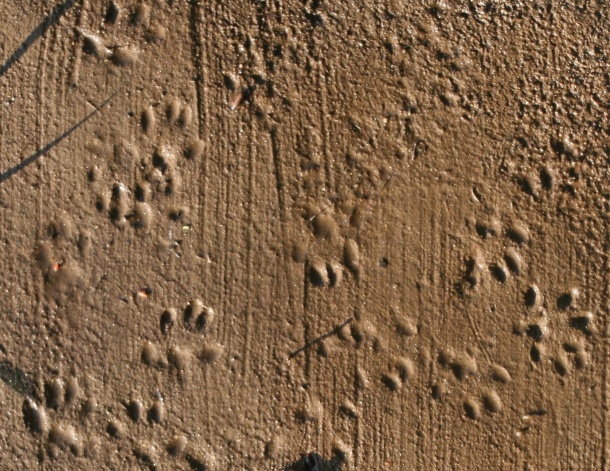 American mink are semi-aquatic therefore can be found in ecosystems which include rivers, lakes, seashore yet shallow slow-flowing eutrophic waters are the ideal environment. This does not exclude fast-flowing oligotrophic waters though as it can also inhabit these types of environments, depending on the food supply.

American mink are usually solitary animals. Male territories rarely overlap and can range from 10 to 50km2. You may find females in male territories, as their ranges are much smaller, about 2km2. The breeding season is brief, lasting around three weeks around the end of winter/beginning of spring. At this time, there is a lot of interaction between the sexes. Males may travel long distances, actively seeking out females to mate with. This, inevitably, leads to increased occurrences of males interacting and more violent behaviours. The mating process itself can also be an aggressive event with the male biting the female and pinning her down by the neck. Regardless, the presence of the males and the start of the mating process induces ovulation in the females. The gestation period is between 33 and 80 days. By delaying implantation of her fertilised egg, the female can coordinate birth with favourable conditions in increase chances of offspring survival. Egg development is halted and it remains inactive until it is implanted in the uterus. Normal litter size is around 5, solely taken care of by the mother.

A comparison of active and inactive locations during the day shows that males are mainly active at dusk and night, and their daytime activity is minimal. Conversely, the distribution of female activity is uniform throughout the day.

American mink are carnivorous and will eat both vertebrates and invertebrates, both aquatic and terrestrial. While fish are the mink’s main prey animal, they are food opportunists and have adapted to killing waterfowl and larger birds, small rodents such as water vole and amphibians.

The species natural range is throughout North America and Canada. The first American mink were brought to Europe in the 1920s. Since then, the first findings of wild animals of this species in Europe can also be dated. Currently, we find mink populations across Western Europe, but also in Scandinavia, Russia, Belarus and Poland. In addition to Europe it was also introduced to Argentina, Chile, Iceland, China and Japan. As the species has considerable reproductive capacity, it has expanded well across our country and across Europe following either escapes or releases from fur farms.

OCCURRENCE IN THE CZECH REPUBLIC

The reason for the introduction of mink to the Czech Republic was due to the increased demand for mink fur products. Almost immediately after it was brought to Europe and the Czech Republic, reports of its occurrence in the wild started to occur. Initially these wild populations were in the vicinity of the farms but inevitably spread to further ecosystems. The first comprehensive report on the occurrence of American mink in the Czech Republic date back to the 1960s (Anděra & Hanzal 1996). During the 1980s, several prosperous populations were established near traditional mink farming areas: Eastern Polabí, Berounsko and Plzeňsko, Central Povltaví and Poohří (Anděra & Gaisler 2012). Another turning point in the spread across the country occurred at the beginning of the 1990s, when these fur farms began to dissipate usually with a mass eviction of the captive animals, flooding the local ecosystem with the now domesticated mink. There have also been cases where minks have been forcibly released into the local ecosystems by animal rights activists.

As an introduced species, American mink represents a potential danger to the original fauna of Europe’s small and medium vertebrates. In a number of studies, the relationship of American mink to potential competitors and prey has been investigated. Firstly, the American mink is a major threat to the critically endangered European mink (Mustela lutreola), and also affects the population of the European polecat (Mustela putorius) as it is a direct competitor for food and habitat. It also affects numbers of its prey species such as the European water vole (Arvicola terrestris), a number of waterfowl and birds nesting on islands like terns and seagulls. It also has a reported negative effect on stone crayfish (Austropotamobius torrentium) and dice snakes (Natrix tessellata).

In recent years, increased attention has been paid to tackling invasive species at a European Union (EU) level. In particular with the Regulation of the European Parliament and the Council on the prevention and control of the introduction or introduction and spread of invasive alien species and the list of invasive alien species who have a significant impact on the Union. In line with EU legislation, Czech legislation is also being amended. American mink is currently not on the “Union list” but is on the Czech List of Priority Invasive Species (see Nature Conservation 2/2016). In addition, the ban on breeding animals exclusively or predominantly for the purpose of obtaining fur was approved in the Czech Republic and was abolished by 31 January 2019. Due to these changes, it is now necessary to consider more extensive eradication projects for the Czech Republic. Still, migration of animals from neighbouring countries such as Poland and Germany is a factor to consider, reliant on individual country management programmes. According to hunting legislation, American mink belongs to the species introduced and undesirable in nature, which can be killed under certain conditions - this activity is the responsibility of the hunters and hunting management.

You can read more about the American mink in our publications page here.

You can find out more information about our American mink projects here.