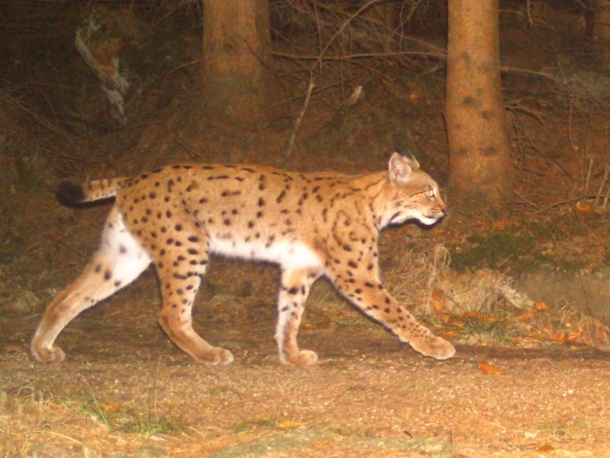 The Eurasian lynx is Europe’s largest feline. It is the main predator of deer across Europe. Throughout the 19th and the first half of the 20th century, however, the Eurasian lynx was extinct in most countries across Western and Central Europe.

The lynx is a medium-sized feline with an average weight of around 20kg. They have characteristic triangular ears, with black tufts of hair at the end. Also characteristic is the short tail with a black end. Many individuals may have large cheeks and long, shaping whiskers. Lynx coats can be very varied yet the basic colourings are grey mixed with yellowish to rusty and brown to reddish-brown spots. The size, number and placement of these spots varies from lynx to lynx and can therefore be used to identify individuals. Coat colour is influence by the lynx genetics so siblings or mother and kittens will often appear similar.

Male and female lynx spend most of the year living separately and only meet in a short period of oestrus, which takes place from January to March. During this time, fighting takes place between males to mate with females. In addition to mating, however, both sexes will fight when defending their territory against members of same sex, even though there is a slight overlap in male territories. A males territory may include several female precincts. Female territories do not commonly overlap.

In May-June, in a well hidden area, females give birth to 2–3 kittens. They will feed there for 2-3 months. and will become independent around 8months - one year. They only move around with their mother, and during this time she will teach them to hunt.

Lynx feed mostly on ungulates. Its main prey is Roe deer and to a lesser extent Red deer, Hare and Wild boar. They will sometimes catch small vertebrates.

Throughout the 19th and the first half of the 20th century the Eurasian lynx was extinct in most countries across Western and Central Europe. The only area in which its population has remained dense is in the Carpathian Mountain range. With targeted protection and reintroduction programmes in several countries (France, Switzerland, Slovenia, Germany, Austria and the Czech Republic), the Eurasian lynx population has been restored in several countries in Western and Central Europe.

Currently, its population is concentrated in several mutually isolated, highly fragmented areas. Several more or less separate subpopulations can be distinguished throughout their European distribution.

Occurrence and distribution in the Czech Republic

In the Middle Ages, Eurasian lynx lived in most areas which had a high proportion of forest, even at lower altitudes. With the beginning of intense agriculture however, forest fragmentation increased and the lynx was gradually pushed into ever higher altitudes in the foothills and mountain areas. At the same time, persecution of lynx by humans increased. Therefore, by the end of the 18th century, the lynx was forced to inhabit, almost exclusively, only our border mountain ranges. In Bohemia these areas were mainly Šumava (Bohemian forest), Český les and Krušné hory but also in Labské pískovce to Orlické hory and Českomoravská vysočina (Bohemian-Moravian Highlands).

The last documented lynx from Bohemia was in 1835 from Tábor (Červený et al. 2006). In Moravia, however, the lynx population remained much longer due to the migration of individuals from the Slovak Carpathians. In the area of ​​the Moravian Karst, Drahanská vrchovina and especially in the Moravskoslezské Beskydy and Jeseníky Mts, individuals were still documented in the early 20th century (Červený et al. 1996).

After 1945, the lynx began to appear again in the same way as the wolf and bear did, first in the Moravian-Silesian Beskydy Mountains then the Jeseníky Mountains. During the from 1950-1960, unique observations from Šumava (Bohemian forest), Český les and Labské pískovce were recorded.

Following the release of 5-9 individuals in the Bavarian Forest in the early 1970s and the subsequent reintroduction of 17–18 individuals during the 1980s on the Bohemian side of the Šumava, the Šumava population of the Eurasian lynx gradually increased (Koubek and Červený 1996). At present the Šumava population of lynx inhabits the area from the Slavkov Forest through Brdy to the Novohradské Mountains in the Czech Republic, Upper Austria to Linz and Bavaria to Regensburg and Würzburg. The focal points of their occurrence are the national parks of Šumava and Bavorský les. It is estimated that 60 to 80 individuals live in this area. The second population still occurs on the border with Slovakia in the Moravian-Silesian Beskydy and Javorníky Mountains.

The ‘Red List of Endangered Vertebrate Species of the Czech Republic’ lists the Eurasian lynx as an Endangered Species. According to Act No. 114/1992 Coll, On Nature and Landscape Protection, and the related Decree No. 395/1992 Coll., the Eurasian lynx is a specially protected animal in the category of highly endangered. In terms of Act No. 449/2001 Coll. the lynx is a protected game species and it is therefore illegal to hunt them.

We have published many articles regarding the lynx. You can read these in our publications section here.

We have some long-term projects involving lynx which you can read about here.