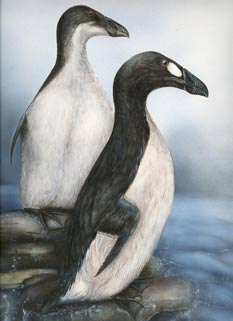 In 1758, the natural scientist Karl Linnaeus described the Great Auk (Pinguinus impennis). It was originally found in isolated colonies in the vast North Atlantic, from Canada through Greenland, Iceland to Great Britain. In the well-known history, Great auks only nested on rocky islands and in the more accessible nesting sites, they were probably driven to extinction much earlier than we know. Some archaeological findings show the Great Auk from the European coast on France to northern Russia. Wintering has also been proven in south of Spain.

The Great Auk went extinct due to excessive hunting for feathers, flesh and fat. Due to flightlessness, they became the victim of often unnecessary exploitation. Their extinction was further accelerated by the desires of collectors. Rare, larger animals were subject to greater interest and suffered higher capture rates to be stuffed or for their eggs. The last observation of a nesting pair dates back to 1844 from Eldey Island near Iceland, when two adult individuals were beaten by sticks and their eggs were smashed. The last living individual was spotted in 1852 near Newfoundland. Since then, the Great Auk has been extinct and can now only be found in museums or illustrations. Only 75 eggs, 24 stuffed specimens and 81 skins have been preserved in museums around the world. In the National Museum in Prague they have two Great Auk - one adult and one immature adult.

Based on studies of mitochondrial DNA, morphology and biogeography it has been confirmed that the Great Auk was closely related to the still surviving little auk. Previously it was included in the genus Alca, which, despite the close relationship with the little auk, proved to be unfounded.

The Great Auk was around 75-85cm tall and weighed up to 5kg. The stunted wings were only 17-20 cm long and the longest feathers were around 10cm. They were excellent swimmers, however, with their wings helping them under the surface to swim and to hunt for prey. Adults were predominantly fish-eating and mainly fed on fish of 15-20 cm in size, with chicks probably feeding on plankton. Each year, the females would lay one egg on bare ground, yet both parents would care for it. Eggs were yellow-white and around 12.4 cm in size.

Today, the Great Auk is represented in the name of the prestigious North American ornithological magazine, The Auk, which was named in its honour. Also, the Great Auk is immortalised in several short stories, novels, songs and even ballet shows. Sadly, however, you’ll never be able to see a Great Auk again.

The Peregrine falcon is one of the few species that after previously declared extinct in the Czech Republic, has returned and is breeding here again.
ALKA Wildlife, o.p.s. © 2021