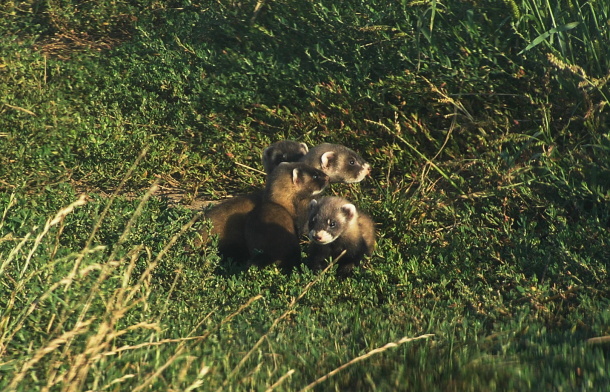 The Steppe polecat (Mustela eversmannii) also known as Eversmann’s polecat, is one the Czech Republic’s rarest mammals. The species was allegedly abundant in the first half of the 20th century but is now considered critically endangered yet we still know very little about its current spread, biology and ecology. It was originally classified as one species with the European polecat (Mustela putorius, Pocock, 1936), but now is considered a separate species (Mitchell-Jones et al. 1999, Heptner et al. 2002), closely related to the European polecat and European mink.

The Steppe polecat is a medium sized mustelid, with their weight ranging from 0.7 - 2 kg, body length from 29-56 cm and tail length from 7-18 cm. They are comparable to the European polecat, but differ significantly in colour. Most of the body is covered by yellow-brown or grey fur whilst its legs, chest and tail are dark brown. The facial markings; pale muzzle, brown fur circling the eyes and pale ears, are less pronounced than in the European polecat, and in older animals the markings can disappear completely to be replaced with white-silver hair. Females are significantly smaller than males.

Steppe polecats inhabit predominantly open steppes and semi-deserts areas with small amounts of tree vegetation. It is also found in meadows and pastures, uncultivated fields and boundaries, and it’s been known to use ravines and abandoned quarries.

It is mainly night active but can also be seen at twilight. Females, however, are more often seen hunting during the day. They feed mainly on the larger steppe rodents, such as ground squirrels and hamsters, whose burrows they may also inhabit. They are opportunistic and hunts for food that is most abundant at the time.

Steppe polecat don’t have a defined home range. Rather, they adapt to the food availability at the time. In places with a high concentration of food, colonies are created with a relatively high density of individuals, yet they don’t usually have defined territories. Mating season is in the spring from March to June and then pregnancy lasts for around 40 days. The female suckles the pup for up to 2 months and will stay in a specific burrow for the duration. The young will live with their mother in a communal hole for about 2-5 months. They research sexual maturity at the age of 10 months but are only fully developed after 2 years.

In the Czech Republic, occurrence is only known in the warmest areas of lowland Bohemia and Moravia. From 1960 to 2003, the species was recorded in 55 mapping squares (Červený et al. 2006). However, due to the possible confusion of the species with European polecat, a number of data should only be considered as very likely, but unverified observations. At present, the incidence is very unclear with only 1-2 documented records each year, from dead animals on the road, across southern or central Moravia..

You can read more about the Steppe polecat on our publications page here.

Check out our identification guide for the Steppe polecat here.

The Peregrine falcon is one of the few species that after previously declared extinct in the Czech Republic, has returned and is breeding here again.
ALKA Wildlife, o.p.s. © 2021