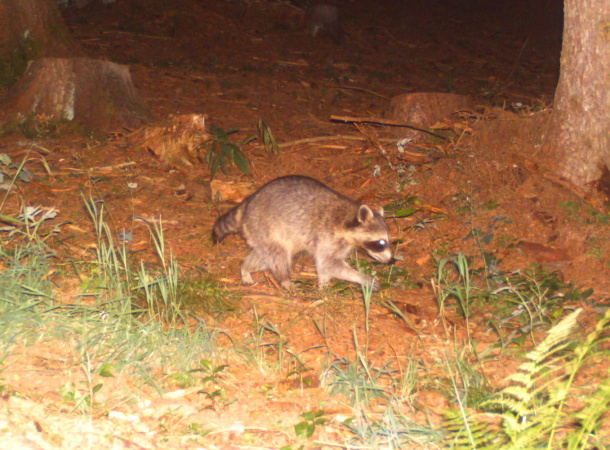 The Northern raccoon (Procyon lotor) belongs to the group of newly occurring, invasive mammal species of our fauna. The species originally comes from North America and the northern part of South America. They were introduced to the Czech Republic through fur farms or by deliberate release. As a non-native species with substantial reproductive capacity, it is expanding both in the Czech Republic and throughout Europe. They are omnivores inhabiting a wide range of different habitats, sometimes linked to wetland sites.

Northern raccoon are a medium-sized mammal with a short body, a long narrow tail, thick hair and strikingly dexterous fingers, especially on the forelegs. The body length is 45-60 cm and the weight ranges from 3-10 kg. They are a faint grey-brown coat and have a characteristic black-and-white mask over the eyes and a dark striped tail, usually 7 stripes. The raccoon is also characterised by an arched back. They can sometimes be confused with a raccoon dog, an unrelated animal you can find more information on here.

The raccoon’s long claws, an excellent adaptation for climbing trees, are noticeable in their tracks. Also, the footprints of the front paws are shorter than the back. The raccoon traces look like human hand and foot prints, only smaller. The size of the back track is 7–9 x 6–7 cm.

The raccoon occupies a wide range of habitats, preferring the proximity of streams, rivers, lakes and wetlands. It can also be found in urban areas, close to cities.

It is a food opportunist with the ability to adapt very well to their immediate environments. In their diet, we find species from invertebrates, plants and vertebrates. It also will eat fruits and nuts if available. They have a very refined sense of smell which is very important when searching for food.

For raccoons, the solitary way of life prevails, although there are cases where more individuals have been observed together. They spend a lot of the time in trees as they are adept climbers, but they are also known to hide in hollows or rocks. They’ll also occupy abandoned fox shelters or badgers sets and relax in bird of prey nests. Mating happens in winter and pregnancy lasts about two months. Usually females will have 3–7 pups in the litter. Males do not contribute to the rearing of the cubs, who become independent after about half a year. On average, wild raccoons will live 6–8 years. They are twilight and nocturnal animals. In the cold regions of North America, a false winter sleep has been reported in this species, with raccoon being unable to leave it for several weeks or months. At the same time, however, he can’t regulate the number of heartbeats or temperature as in other mammals who truly hibernation. The scientific name, Procyon lotor, is given so due to one aspect of the raccoons behaviour. In Latin, “lotor” means “washer” which is in line with their perceived act of soaking or washing their food before eating. Most of the time, however, they are feeling in the water for food and using their high dexterity to remove unwanted parts.

Introduction outside of North America

The raccoon is indigenous to the North American continent, approximately 56–58 ° N. They came to European fur farms in around 1927, firstly in Hessen, Germany. The number of animals in these farms and the number of breeds quickly grew, and by 1930 –1935, the first reports of escapees in the wild, in south and southwest of Germany, were being reported. At times, the raccoons were deliberately released into the wild, and others were released into the wild during a massive bombing at the end of World War II. The current area of occurrence covers a substantial part of Germany and is expected to spread to neighbouring countries. Outside Western and Central Europe, it was deliberately released in, for example, Russia, Belarus, Azerbaijan, Uzbekistan, and Kyrgyzstan.

The first raccoons were recorded in the wild as early as the twenties and thirties, in the Czech Republic and Moravia. Undoubtedly, these were individuals escaped from captivity. After the First World War, the number of fur farms increased, and the number of wild animals increased accordingly (Anděra & Gaisler 2012). In addition to the expanding wild population of Germany, escapes from breeding and local attempts of releasing captive animals, also contributed to the spread of this species in our country. The distribution of the raccoon has not been as fast as other invasive mammals such as the American mink or raccoon dog, but in some areas, you can find high local populations. The current occurrence is scattered, the large occurrences in the Karlovy Vary and Olomouc regions.

As an introduced invasive species, it represents a potential danger to the native fauna. As an adept tree climber, it poses a potential threat to tree dwelling species such as nesting birds. The Northern Raccoon has no protective status in terms of the Nature Conservation Act. According to hunting legislation, it is one of the species introduced and undesirable in nature, which can be killed under certain conditions - this activity is the responsibility of hunting guards and hunting management.

You can read more about the raccoon in our publications here.

We are actively monitoring the raccoon presence, find out more information on our projects here.