The American mink (Neovison vison) belongs to the group of non-native mammal species, spreading across the Czech Republic. As an introduced species, the American mink represents a potential danger to the natural fauna including ground dwelling birds and small to medium vertebrates. Strong predation pressure on many animal species has already been found in the Czech Republic. These include, but are not limited to: nests of the dipper, mountain wagtail and kingfisher, waterfowl, dice and grass snakes, green lizards, crayfish and amphibians especially frogs as well as newts.

The aim of this project was to reduce the predation of a number of endangered animal species by American mink which may be reducing the biodiversity at two locations in the Vysočina Region - Černíč and Šlapanka and Zlatý potok. Given that there was no recommended methodology for regulating or eradicating American mink in the Czech Republic, this project was considered a pilot project. The second objective of the project will be to propose an effective methodology for eradication of mink in the conditions of our landscape (capture methods, capture frequency, minimum area size, site refilling rate).

Šlapanka is a naturally meandering stream from Polná to Havlíčkův Brod. Zlatý potok is also a stream but starts from Střítež and confluences with Šlapanka. Both streams are located in the central part of Vysočina, with an area of around 245ha. They are very well-preserved streams with European Bittern, the Great Arbor, and many other important species occurring there. Also, close to the river are important sites for waterfowl and amphibians, with the most important being the pond below Bartoušov. On this pond, predation of an entire breeding population of Moor frogs was recorded by the American mink - data from Nature Conservation Agency of the Czech Republic. Specifically, populations vulnerable to American mink presence are: Crayfish, Great-crested newts, Brown frogs, Green frogs, Common snipe and Kingfishers.

Černíčský rybník is a pond in the valley at the confluence of the Moravian Dyje and Myslůvky. The area consists of 23,7ha while the water level reaches 10ha. The site was declared as a protected area in 1953. Species vulnerable to the presence of American mink are: Green, Brown, Moor and Pond frogs, European tree frogs, Common toads, Fire-bellied toads, Common spadefoot (toad) and Great-crested newts. Among other animal groups, the following species are also at risk: Grass snakes, Water rails, Moorhens, Kingfishers, Common harriers and harvest mice.

For the regulation of the local mink population, the method of repeated capture of wild animals was used. This meant trapping animals with traps designed and installed to maximise mink capture and minimise capture of other animal species. 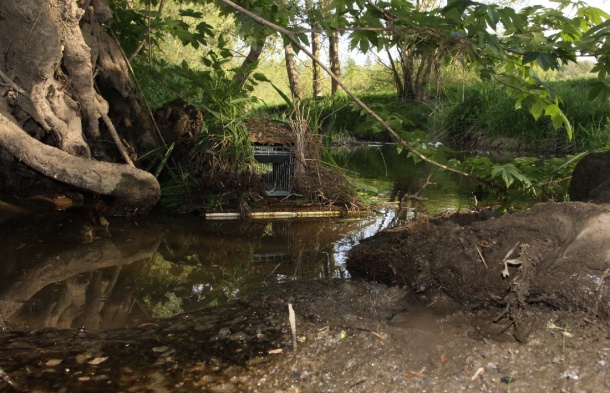 For additional monitoring of the presence of mink in both areas, monitoring rafts were deployed. Monitoring rafts are floating areas with a soft substrate on top on to which the animals leave imprints of their tracks and can therefore be identified. It is a non-invasive monitoring method successfully used in the UK (Reynolds et al. 2004) and does not endanger any animal species. For us, this is the first time we have used this method.