(European Union and Ministry of Environment of the Czech Republic)

American mink (Neovison vison) belongs to the non-native species of mammal fauna in the Czech Republic. As an introduced species, it represents a danger to the original fauna of Europe’s small and medium vertebrates. Nowadays, it can be found in a significant amount of the Czech Republic. In the Bohemian Switzerland National Park, its presence was first discovered in the winter of 2009, during a project count ign Eurasian otter in the snow. Following this discovery, negotiations were held with the Administration of the Bohemian Switzerland National Park which resulted in a contract of cooperation regarding the regulation of the American mink in the park and the development of this project. The aim of this project was to map the occurrence and regulation of the American mink throughout the national park. The project also focussed on the parks surrounding areas, especially the river basin flowing into the park.

Bohemian Switzerland National Park is located in the district of Decin, the area where the Elbe leaves the Czech Republic and flows into Germany. The main area of protection is the unique sandstone rock town where rare plants and animal species reside. The area consists mostly of Cretaceous Mesozoic sediments, however later volcanic activity broke up the 1 km thick sandstone slabs. For millions of years, the landscape has been shaped by a variety of erosive forces. The area now consists of gorges and canyons, surrounded by rock towers and massifs, forming these ‘rock towns’. The Elbe Canyon, between Děčín and Hřensko, represents a unique natural formation including important tributaries including the Kamenice and Křinice streams. Watercourses often excel in quality and unregulated channels. The species-rich ichthyofauna is made up of both bream species (which live in the Elbe), trout, grayling and the European bullhead. There are numerous populations of crayfish including the rare, critically endangered, stone crayfish. Salmon has also returned after many years and this is still the only locality of this species in the Czech Republic. Other species at risk due to the occurrence of the American mink include a number of amphibian species, such as green brown and moor frogs or great crested newts. The main reptile found in this area is the grass snake. Vulnerable species of birds include dippers, mountain wagtails and kingfishers.

The project monitoring methods, tested, used and proven in a previous project Regulation of American Mink in Vysočina, combined with camera trapping.

The regulation of the population was carried out by the method of repeated capture of wild animals. Mink catch traps were used for trapping, designed and installed to maximise mink capture and minimise capture of other animal species.

The occurrence of American mink was monitored with monitoring rafts and camera traps. Monitoring rafts are floating platforms with a soft, permanently moist substrate inside, on which the animals leave a trail. Camera traps are photographic devices which capture images of animals when they triggered the thermal sensor. 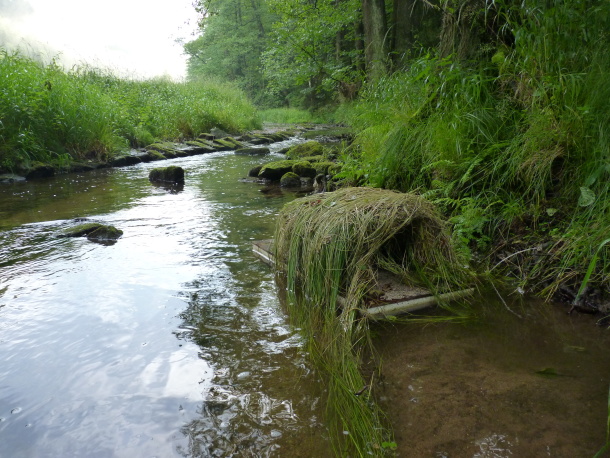