ALKA Wildlife > Projects > The potential recolonisation of otters in Switzerland

The potential recolonisation of otters in Switzerland

Switzerland is one of the countries where the Eurasian otter has completely disappeared during the last century. The most important factor in the disappearance of otters in Switzerland seems to be the high levels of organochlorides (especially PCBs) in the ecosystem. Various activities have been going on in Switzerland for a long time to restore otters in this country. The recolonisation of Switzerland is potentially possible due to the current trend of spreading otter populations in many European countries. Unfortunately, the potential migration of otters in the Alps region is reduced by the high mountains separating individual river basins and the considerable destruction of some rivers flowing from Switzerland.

The aim of the project was to evaluate the possibility of natural migration of otters to Switzerland from otter populations from neighbouring countries (Germany, France, Austria, Italy). The project was based on mapping otters in neighbouring states and identifying possible migration routes for individuals from the nearest populations to Switzerland. Revitalisation efforts will then be concentrated on these potential migration routes.

In the autumn of 2007 and February 2008, several areas in the neighbouring countries of Switzerland were explored in order to estimate, based on the known range of otter spread in these countries, probability of this recolonisation. The research was based on 477 bridges suitable for otter monitoring. These bridges were located on a series of rivers and their tributaries: 143 bridges on the Rhône in France, 13 on Mossele, 135 on the Rhine (France 51, Baden-Württemberg 52, Bavaria 5, Austria 27), 99 on the Danube in Germany and Tyrol (Austria), 36 on Ticino (Italy), 34 on Adda (Italy) and 17 on Adige (Italy).

In the past, no research has been carried out in the areas mentioned and otter data were only available from two repatriation areas, Alsace and northern Italy, and the Haute-Savoie district, south of Lake Geneva. The number of otter recordings south of Lake Geneva after 2000 increased significantly, compared to the previous two decades, and the latest occurrence records observed by a French colleague in April 2007.

During our survey, we found signs of otters in Alsace on the Fecht River (5 bridges) on the Ticino River southwest of Milan in Italy (2 bridges) and the Inn and Ziller rivers in Tyrol (3 positive bridges). 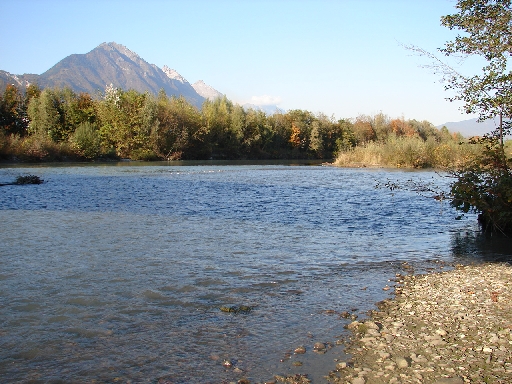 Will the Eurasian otter migrate from Austria to Switzerland? (článek v novinách, pdf)