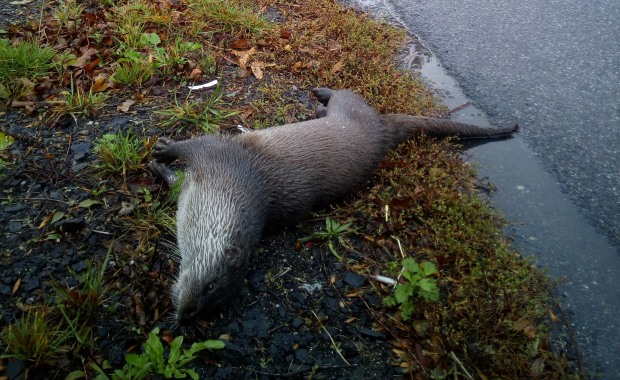 Black October for otters: 17 dead animals found on the roads

Lidéřovice, November 3, 2018: Experts say October 2018 will be black in otter statistics for our country. This month they found seventeen dead otters on the roads. With the increasing intensity of road transport, the number of individuals killed of this protected animal is increasing. It turns out that traffic is a crucial factor for otter survival.

From Vodňany to Poodří, experts monitoring the otter population in our country collected dead otters from the roads throughout October. Total Number - Seventeen otters - a black mark in otter statistics.

“This month we organised the collection of three otters, one from the main route from Prague to Tábor, the other from Příbram and the third from Vlašim. An otter from the end of September from the Prague Ruzyně ring road will also be collected. In our region, traffic on the roads is extreme, and although there are not a lot of otters, we often still find them on the roads,” says Tereza Mináriková from ALKA Wildlife, collector coordinator for the Central Bohemian Region.

“The South Bohemian region is a traditional area for otters but a lot of busy roads intersect the pond landscape. We now call the road from Třeboň to Veselí nad Lužnicí “the road of death”. In recent years, the number of deaths on roads from České Budějovice to Prague has increased, whether through Písek or Tábor. Therefore, in October, we collected otters near Nerestka, Mirotice, Protivín, Vodňany, Hluboká nad Vltavou and also at the end of the new section of the D3 motorway near Borek,” adds Lukáš Poledník, coordinator of the South Bohemian Region. Three other otters were found on the roads of the Vysočina Region and two otters from the Liberec Region, only one from the Královéhradecký, Moravskoslezský and Zlínský regions respectively need to be added for a complete picture [1,2].

“We haven’t seen so many otters dead on the roads in one month. It’s a sad record, but not surprising,” says Kateřina Poledníková from ALKA Wildlife.

_“The collection of dead otters has been organised in our country since the 1970s, when rare otters began to return to our waters. Gradually, we found more and more otters on the roads and in recent years it averages about sixty animals a year. This year, however, we are now at 55 and still have two months to go. Two major phenomena have caused this growing number. Firstly, the otter population has grown since the 1970s. In recent years, however, the population is already stagnating. Secondly, and more obviously, the cause of the growing numbers of killed otters due to an increase in number of cars on the roads, travelling faster, with more chance to collide with otters. Otters are great travellers themselves, travelling a few kilometres a day. Yet they must cross the ubiquitous roads. If a bridge or tunnel is poorly constructed, the otter must climb to the road and run over it. This, indisputably, increases their risk of death.” _

Mathematical models also help to monitor the evolution of the population of endangered species and the influence of various factors. _“Eight years ago we created the first model for the Eurasian otter in the Czech Republic. Taking into account the forecasts in traffic development, this model already foresees a 2% increase in road otter mortality in the coming years. The model showed that the otter population soon gets into a state where it can no longer compensate for road losses and the otter begins to decline. The current reality shows the model in truth. It is therefore possible that the otter, which has returned to our nature in recent decades, will again disappear in some areas,” _adds Kateřina Poledníková.

The intensity of road traffic on the roads is constantly increasing. It is now becoming a critical factor for many animals in our country such as frogs and toads, hares, hedgehogs, ungulates, but also larger animals such as the, also endangered, Eurasian lynx perish on the roads.

[1] Data of animals killed on the road is important source of information which is why their collection is organised. The following data are obtained: risk spots, cause of death, further injuries, sex, age, female placental scars, whether or not they have pups, tissue samples from different parts of the body for further analysis e.g. checking for heavy metals, looking for internal parasites.

[2] More information can also be found at www.vydrynasilnici.cz with the complete list of the 17 dead otters. 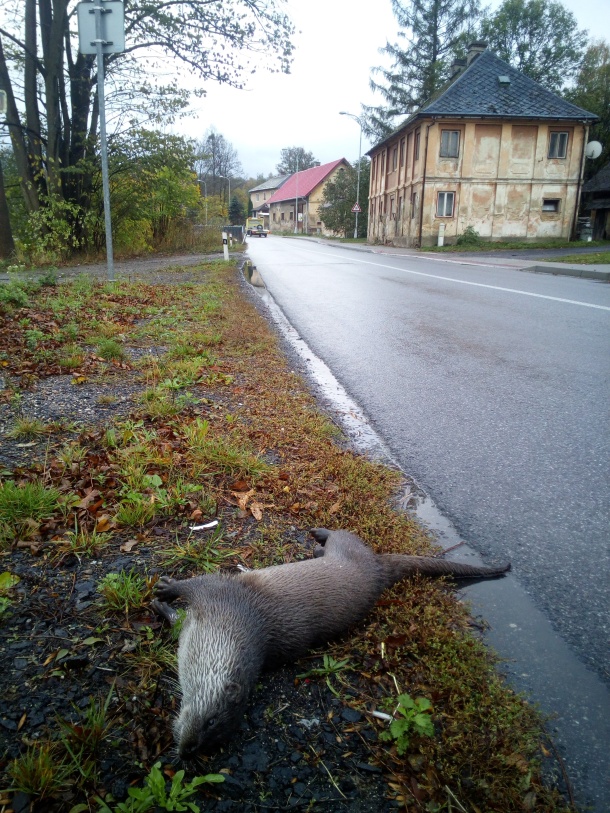 _Photo: Dead otter on the road after a collision with a vehicle in the village of Raspenava on October 25, 2018 (Owner: Radomír Studený) _