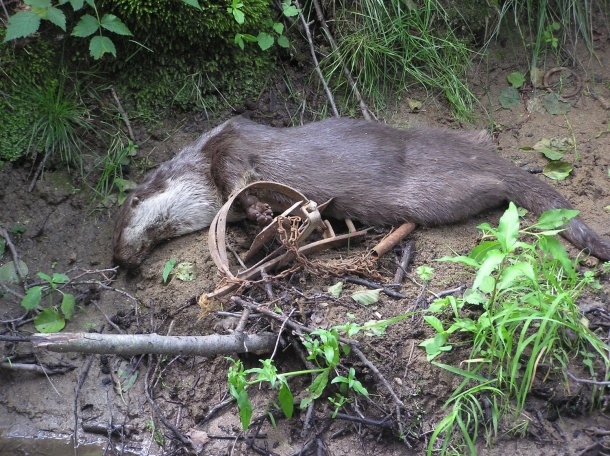 **Lidéřovice 7.12.2018: Representatives of the Czech-Moravian Hunting Union, the Czech Fishing Union and the Fishing Association of the Czech Republic said yesterday that they proposed to capture otters and beavers in “deadly traps”. Experts warn, however, that although the type of trap was not disclosed, they are usually cruel and inhumane, prohibited in civilised countries. In addition, they can very seriously injure or, in extreme cases, kill humans and certainly free-running dogs. Will we now not be able to walk along ponds or swim in rivers? **

Representatives of the Czech-Moravian Hunting Union, the Czech Fishing Union and the Fishing Association have said this week (1) that they are proposing to capture otters and beavers in “deadly traps”. The press release did not state what type of traps are going to be used. Only a few types of traps can be considered, however, and they are all dangerous, cruel and non-selective. One type of trap used could be where the animal enters, is trapped, and drowns under water. Another type could be conibear traps. These types of traps capture animals when a trip wire triggers a spring to release and force the trap shut, around the animal. The aim is to capture the animal at the neck to break it, restrict blood flow and quickly kill the animal. This, however, does not always happen and the animal can be captured by any part of its body, ending up brutally injured and left in the trap to die slowly for hours or even days. Both traps are inhumane and cruel to the animals caught. Moreover, these traps are non-selective, that is, any animal of the species in question, including the offspring, can be caught in them, as well as other species that move in the environment, both wild and canine (2). Their size is also dangerous for humans and can pose a serious health risk if someone is caught in one.

These types of traps are prohibited in the Czech Republic, both by the Hunting Act and by the Law on the Protection of Animals against Cruelty.

Lukáš Poledník, an expert in the Eurasian otter from ALKA Wildlife o.p.s. comments:

“We deal with the issue of poaching otters as part of our activities to protect the Eurasian otter and unfortunately we also encounter irregularly made traps. It is a very dangerous trap that more often does not kill the otter, but only severely injures. The otter then experiences great suffering and often dies in the trap after many days. In addition, these traps are also very dangerous for people as they cause serious injuries. In 2015, a ten-year-old girl was caught in a trap in Jeseník (3). In this case, nothing happened, but she was very lucky.”

“It is important to realise what the use of these types of deadly traps in the wild mean in practice. Conibear traps are put ashore or in shallow water and are extremely dangerous as they have great power. These are non-selective traps that kill or severely injure any animal of a given size, even a human, if it gets into the trap. The Eurasian otter weighs about 7-12kg, the European beaver from 11-30kg, so these traps would be fatally dangerous to many other animals, including domestic dogs and cats. What could a deadly trap made for an animal the size of a beaver do to a small child, I dare not think. Deadly traps are dangerous to humans, not wolves, beavers or otters, as hunters and fishermen say.”

Aleš Toman, zoologist, hunter and nature conservationist with many years of experience in caring for injured animals adds his opinions on the use of these traps:

“The trapping of otters in non-selective traps such as these contradicts hunting ethics. Young otters stay with their mothers all year round. This kind of regulation, in a protected species, is totally unacceptable.”

Vaclav Hlavac, zoologist of AOPK CR explains the state of beaver and otter populations in the Czech Republic:

“Eurasian otter and European beaver are native species of our fauna, which belong to our nature and play an irreplaceable role. It is not true that somehow, they harm natural ecosystems or biodiversity, as fishermen and hunters claim. On the contrary, the European beaver has a very positive effect on watercourses, which it can completely revitalise by creating pools for amphibians and fish shelters. It is true that it damages our manmade dams, but they can be secured against the beaver. In addition, the state nature protection is aware of this problem and zones with different types of management have been defined.”

Lukáš Poledník adds further information regarding the otter effect on our ecosystems:

“The otter is continually blamed for the loss of fish from watercourses, but according to the results of our research, otters in a healthy ecosystem practically do not affect the status of fish communities. On the contrary, for a long time the actions of fishermen are unfavourable to our ecosystems. They stock our rivers with non-native species or fish lines that do not belong to our natural fauna and do not adequately protect our native populations of domestic fish species, which in turn often cannot reproduce. In such conditions, fish communities can hardly prosper. The otter is then blamed for unfavourable results.”

“Most people perceive the return of otters and beavers to our nature positively and their positive impact on our nature is unquestionable. We should not give in to the demand of interest groups that demand they should be hunted. They could very easily be eradicated.”

Václav Hlaváč adds, with the consent of all:

“We consider the idea of using deadly traps to be very dangerous and thoughtless, and I hope that - even with regard to the health and safety of the population - it will never be achieved.”