ALKA Wildlife > News > Falcons in Litvinov are preparing for young

Falcons in Litvinov are preparing for young

Peregrine falcons are preparing for young in the Litvínov chimneys

The Peregrine falcons are migrating back! The nest boxes on the chimneys of the Litvínov chemical plant are once again occupied, after half a year of being empty. Peregrine falcons, from the foothills of the Ore Mountains, are preparing to nest again to raise a new families. Since 2011, 23 chicks of this critically endangered species have hatched here in Litvínov, with the support of Unipetrol and the non-profit association ALKA Wildlife. In addition to the Litvínov plant, falcons also liked the chimneys in Kralupy nad Vltavou and at the Neratovice Spolana site.

“Peregrine falcons nested on the chimneys of our Litvínov site last year. They brought five chicks into the world. We are pleased that they are starting to breed again this year, and we are looking forward to seeing the chicks soon,”

There are two nest boxes at the Litvínov chemical plant site. The first is on the chimney of the local heating plant and the second on the chimney of the ethylene unit. Both are installed at a height of over one hundred meters as natural falcon nests are at the highest point they can find, so they have peace, quiet and an excellent view.

Every spring, the ornithologist Václav Beran, from ALKA Wildlife, checks these nest boxes. Naturally, this was the same this March:

“Before the falcons returned, we cleaned the two nest boxes, checked their stability and prepared new camera traps. More recently, we climbed up to the nest boxes again to confirm our ground observations. We found fresh remains of food and droppings, which means that the falcons are back, consolidating a partner bond and preparing for nesting. If everything goes according to plan, they will soon end up with three or four eggs to sit on for about a month. We will go to the chimney again at the end of April to ring the new-born chicks.”

The Peregrine falcon can live for up to twenty years, returning to its favourite breeding grounds for life. With a maximum speed of over 350 km/h, it is probably the fastest animal on Earth. The Peregrine falcon is a native species to the Czech Republic. The population of this predator, who hunts pigeons, ducks, smaller birds and bats, was strongest in the 1940s and 1950s, when up to sixty couples were reported in Czechoslovakia. Unfortunately, they disappeared from the Czech landscape in the 1970s due to excessive use of agricultural pesticides. Thankfully, they began to appear again in the late 1980s and at the turn of the millennium, there were about twenty couples in the Czech Republic. Today, due to strict protection, there are now roughly eighty pairs in across the country. 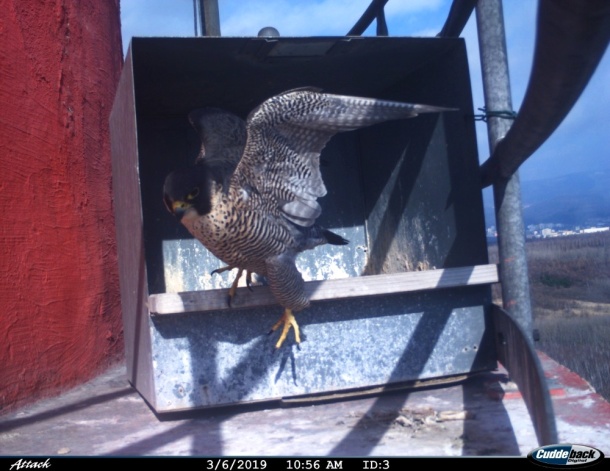