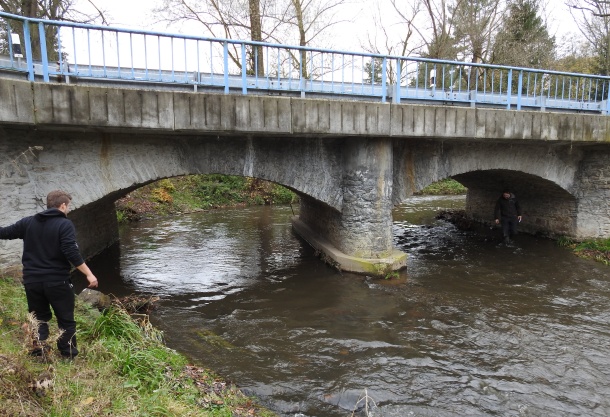 The Eurasian otter is a large mustelid whose population status is increasing in the Czech Republic after decades of decline. You can see them in Krušné Hory and that’s where we are heading to!

We are doing this for quite a few reasons. We have the following questions we want answered:

We’re going to be trying to answer these questions in our new ‘Lutra lutra’ project, partnering with our German counterparts on the other side of the border. The very first field survey and joint field meeting with our partner organisations suggested has already answered some of our questions. Promisingly, we found otters in most of the controlled streams, down in the valleys and up to the highest locations in the Ore Mountains. We also found that in the Ore Mountains, you can see both natural streams and heavily regulated stretches. These stretches, influenced by coal mining, have a number of longitudinal and transverse barriers, which prove an issue to cross for fish, otter and other animals. We also found, as with lots of other areas in the country, there is also a major waste issue surrounding these rivers.

Apart from finding tracks and signs of otter we interestingly found tracks of racoon in the Podmileský creek in the North. This is a non-native North American, invasive species. Invasive species can have serious negative impacts on our native species and there are plans for their control. There are two large populations in the Czech Republic, one of them in the nearby town of Karlovy Vary.