The Eurasian Otter is a predator whose population status is increasing in the Czech Republic after decades of decline. Firstly, for species success, otters need a healthy aquatic ecosystem. Clean water, fish in the streams, amphibians in the pools, and vegetation along the banks to keep them hidden are all features required for habitat they live in. Secondly, they need enough of this type of habitat to sustain the whole population. They have a relatively large territory and for the population to function, there needs to be enough habitat available so individuals can communicate with their neighbours, without too much conflict and so young animals can travel and find their own territories. These requirements put an increased pressure on the species, to find interconnected areas without significant barriers which might force them onto roads or to urban areas.

This information has led us to the following questions:

We would like to answer these questions within the Lutra lutra project.

Objectives of the project 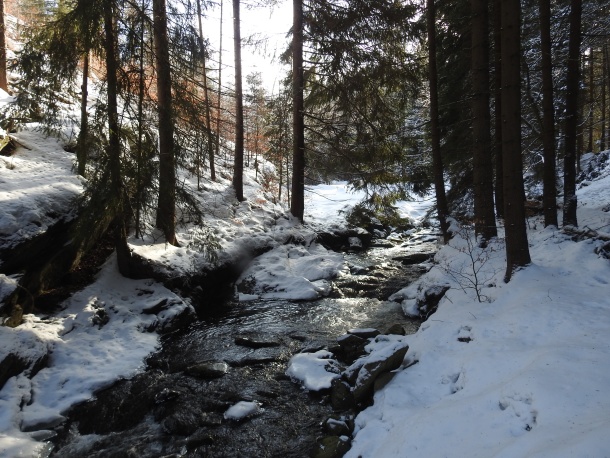 Detailed monitoring of the occurrence of the Eurasian otter in the target area will be carried out. The target area is a catchment area of the cross-border rivers Sapava (Zschopau) and its tributaries Polava and Přísečnice, Moldava (Freiberger Mulde) with tributaries and Divoká Bystřice (Wilde Weißeritz), the upper catchment area of the Flájský brook with tributaries Černá , Świdnica, Načetínský potok and streams draining water from the Ore Mountains towards Ohře and Labe: Prunéřovský potok, Chumutovka, Bílina, Kundratický stream, Bouřlivec and Bystřice.

Individual streams and other bodies of water such as ponds will be assessed for their potential for otters and their prey animals.

Genetic samples are to be taken from potential source populations (Saxon and South Bohemian) and will be compared with samples obtained from the target area. The project aims to determine the current genetic status of the individuals now living in the target area, the relationship between subpopulations and any interconnections between populations.

IDENTIFICATION OF MIGRATION CORRIDORS AND ANALYSIS OF RISK POINTS

On the basis of preliminary analyses, a total of five areas were identified where otters can cross the river basin/border by land: Vejprt, Hora Sv. Šebestiána, Hora Sv. Kateřiny, Český Jiřetín and Moldava. The project aims to collect otter samples in the snow to identify cross-border migration routes. In addition, the project aims to identify migration routes along the streams and the places in which otter migration may be more difficult such as poorly designed bridges, channels, improperly modified flows in urban areas, etc.

PROPOSALS FOR MEASURES TO PROTECT THE OTTER

Measures to eliminate, or at least mitigate, risk factors will be proposed based on the information collected in the project. Following this, a solution based proposal will be presented for high-risk places on the road in an attempt to allow the otter to pass safely.

In order to reduce conflict, an awareness campaign will take place. An information publication will be prepared for fisherman and others who use known fishing areas. Fisheries and other relevant partners will be contacted to ensure a stable environment for the otters.

About the project in local media