Nature and Landscape Protection Agency of the Czech Republic

The return and restoration of the Eurasian lynx is an effort of many European states, including the Czech Republic. Lynx inhabit large areas and they commonly migrate and cross borders of several states. To ensure the protection of these threatened carnivores, it is therefore necessary to obtain comprehensive data about their lives across the entire area the population inhabits and to align conservation efforts accordingly. However, much more needs to be done to ensure long-term survival of the lynx such as implementing measures to stop illegal hunting, to reduce the fragmentation of the landscape and to try to correct it. Equally as important making sure there is good cooperation and communication between all stakeholders which ranges from conservationists to foresters, hunters, the general public, and state administration.

The 3lynx project aims to coordinate the monitoring of the appearance of features in 3 isolated populations that affect several states. Comparable data collection and rapid sharing is a prerequisite for effective species protection.

The specific goals are:

To improve the cooperation of all partners, a series of workshops will be organised to assess the involvement of key stakeholders (hunters and foresters) in the protection of lynx, to jointly analyse information on the status of populations and develop tools to analyse this data. A series of discussion meetings and workshops on poaching and general lynx protection with also take place. Together, a strategy will be developed.

Population characteristics will be monitored in two cross-border regions (Czech Republic - Germany - Austria and Slovenia - Italy - Croatia) using a network of camera traps and winter snow tracking. Genetic samples will be collected for genetic variability of populations; telemetric monitoring will be performed. As part of a public awareness campaign, a joint international “Lynx Day” will be organised, with a range of public activities from lectures and films to children’s programmes. Media and public educational information will be published including booklets about the protection of the Eurasian lynx, project websites, Facebook posts, press releases, reports and magazine articles.

The project will also support the investigation of illegal hunting of Eurasian lynx. Autopsy’s on lynx found dead will take place and possible further analyses will take place. These types of cases will include the police and will be publicised as much as possible.

The greatest traveler of 2018 is Daniel

Interview about the wild cat

The return of the wolf to Pošumaví

A lecture on camera trap monitoring in the Bohemian forest

Behind the lynx of the Novohradské mountains

This map was created in the Translynx project, but is being expanded and added to by the 3Lynx project. 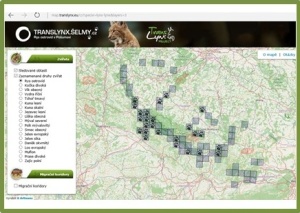 On the Trail of the Eurasian Lynx (Article in Countryside magazine)

Czech Republic teams up with other countries to protect endangered lynx (Radio Prague 31.8.2017: Interview about 3Lynx project with Tereza Minárikova)